How are Paraclete Mission Group associates coming alongside Latin Americans as they heed the call to serve others? 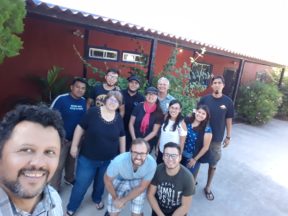 It was my first time using my new Zoom teleconference subscription, and I was worried that my subscription would cut us off too early. It wouldn’t be enough time, I worried. I had questions for a story I was working on about a new ministry ConSiervos, or Bond Servant. And, more importantly, we needed room for relationship, too.

I planned to interview a team of four new Paraclete associates in Mexico who were certainly not new to Latin America. I hadn’t met any of them in person. But I’d read their bios. I knew that one is Venezuelan. One grew up as a missionary kid in Columbia. And the four of them have spent a collective 90 years serving in the land of warm climate, welcoming culture, and friendly people. So, our conversation would definitely need space for a good warm-up.

“Mañana,” Ruth Van Kirk said, when we were over an hour into our conversation. Not only had Zoom not cut us off, but we all agreed we had time to keep chatting. Tomorrow…no hurry to get back to our tasks. There’s always tomorrow.

Plus, we really did have a lot to cover. Paraclete associates Miguel and Becky Aguirre and Ken and Ruth Van Kirk have big ideas. They believe in the potential of Mexicans as “deacon-missionaries” but want to make sure these colleagues of theirs have what they need to be both cared for and be successful. Specifically, they provide training, mentoring and connection for Latin Americans with a heart to serve cross-culturally.

“When we think of Latin America, we typically think of it as a receiving field,” said Becky Aguirre. “Well, now things have changed.”

“There is a strong desire for the Mexican church to be involved in the Great Commission, especially in the 10/40 window and the unreached,” Miguel Aguirre said.

This desire has turned into a movement of Latin Americans turning to churches and mission organizations to send them to the other side of the world, or to their own backyard, the Aguirres said.

A conversation around the need for more diversity in all spheres of life and work has picked up speed in Christian organizations. The collaborative association Missio Nexus recently spent an entire Anthology journal on the topic. And a speaker of this month’s OnMission Mobilization Webinar added to the conversation.

“Growing up in a mostly black context, I’d heard of missionaries, but didn’t give much thought to them,” said Irmiyaa Williams, with Global Frontier Missions. “And when I did, I didn’t picture someone that looked like me.”

Williams went on to emphasize the spiritual component—and prayer—of inviting people into missions.

“We’ve got to remember that we’re not after diversity in itself, but the goal is faithful obedience in the life of every believer across all races and all ethnicities,” Williams said.

That initial obedience is an important starting point and something that has grown and even, due to its culture, comes naturally, to Latin Americans in the form of passion, willingness to sacrifice and strong work ethics, Becky Aguirre explained. Latin American missionaries, specifically, can fit into many of the areas of the world where language translation, development work, and Gospel outreach is needed. The Bond Servant project works specifically with those who aren’t traditional missionaries, but want to use their own skills—medical, mechanics, aviation, construction—to come alongside church planting teams to meet community needs.

“Even though a person may be serving as a doctor or nurse or teacher, they are equally reflecting Christ through their relationships,” Becky explained. “As the Latin American movement became more aware of the possibility of going to other places that has really gotten their attention. Latin Americans bring a lot of passion, and excitement.”

But while Latin Americans can bring an advantage, they don’t fit completely into American or European boxes on how to care for them once they’re overseas.

“The challenges are because of the (extended) family,” Becky said. “It’s very difficult to separate. They’re very dependent on their family.”

From a western standpoint, such dependency, in the form of living in multi-generational homes, is unusual and even judged in a negative way. American and European-based organizations have moved toward providing missionary care by way of counselors and psychiatrists to help workers thrive when serving cross-culturally in high-need areas. But organizations and sending churches need to keep the strong family system in mind when caring for Latin Americans.

“You’re not mobilizing an individual, you’re mobilizing someone who’s highly connected to a family system,” Becky said. “A Latin American family who is taken out of their family and put in an Asian culture may have greater needs. That may hurt more emotionally, maybe three times as much as an American family who’s been independent since college.”

But recognizing those connections and finding ways to cultivate them can become a big source of care and support for Latin Americans, she said.

Also, those training, mobilizing, employing and caring for Latin Americans need to keep in mind the strong possibility that Latin Americans have experienced trauma in their lives.

“In the backgrounds of these students, there’s a lot of violence and trauma,” Ruth said.

So, the training and mentoring that the Bond Servant project provides works to stay aligned with principles of trauma-informed methods, emphasizing psychological safety, empowerment, voice, trust and transparency.

In the end, the goal isn’t just about bringing together a team to get a job done, Ken Van Kirk said. It’s about community—safe, holistic, God-honoring community.

“The whole idea of living life in community is that it reflects Jesus, it extends the Gospel, but it also brings that safe haven, shalom peace,” said Van Kirk.

To read more about Paraclete associates and the ConSiervos ministry, read the Paraclete Mission Group 2020 Summary of Ministries.