She weathered a hurricane. Here’s how she did it. 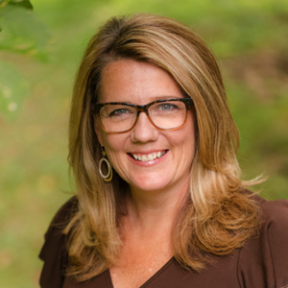 Esther Weston is no stranger to rolling up her sleeves and getting her hands dirty. She does it for a job—from the comfort of her own home.

“The work that we do is clean up the debris from sin, from trauma, from the brokenness of this world,” she said. “And a lot of times we don’t want to do that clean up. We want to minimize it. We want to pretend like it’s not there. We want to give simple Christian platitudes.”

Sometimes she also gets to travel the world as a Paraclete associate, working with a team of trainers for the Deep Community Experience for missionary teams. But recently, travels haven’t been easy and her home hasn’t been so comfortable. And the trauma she cleans up? It’s her own.

Hurricane Ian ravaged the small Floridan island where she and her husband, Matt, moved to two years ago.

“It’s always interesting finding myself traumatized and going, ‘oh, yeah, this is what this feels like,’” she said.

The Westons did their best to prepare. They secured several neighbors’ properties. Then at the last minute, a neighbor offered them enough plywood to cover their own windows.

Then they had to decide where to evacuate. To Tampa where her sister lives? But this would be toward where the hurricane was suddenly changing course. To Orlando where someone had offered a place to stay? What about their septuagenarian neighbors who didn’t want to leave?

On Monday night of the week of the hurricane, Esther decided to drive to Orlando, while her husband stayed behind with the neighbors. By Tuesday, the neighbors decided to go to the mainland—and then, when the storm picked up, to head to Orlando with Matt the following day.

From Orlando, the Westons watched news reports of how bad it was getting on their island.

“We just had a few moments of breaking down together,” she said. “We could lose everything. We could go home and not have a house or anything left.”

The storm also hit Orlando—at category 1—on Thursday. Her husband left first to return home on Friday, knowing that basic communication infrastructure would not be online yet, and not knowing if the ferry to the island would be running. Matt was prepared to kayak over if he needed to.

Esther stayed in Orlando another day to coordinate supplies. But where to even start?

“OK,” she told herself. “I need to purchase things here in Orlando because shelves are going to be cleared.”

But, “I could not think—to save my life—of a single thing.”

Then she remembered her training in trauma: Care for the body. She knew she wouldn’t have any running water once she got home. So, she took a hot shower.

“My brain started to work,” she said.

Next she leaned into the other thing she knows works in moments of crisis—community. She started a group text with neighbors who were scattered all over so they could put the word out to voice needs, collect resources and check on each other.

“It’s by far the most closely knit community we’ve ever lived in,” she said. “When you live on an island together, you feel like you’re in this thing together.”

She finally left for home really early Saturday morning, hoping to beat the crowds and find her way around flooded roads. It took her twice as long as usual to get home.

“Every street was like a war zone,” she said.

She made it home. The house was still standing but needed a lot of work to clean up the water damage—but without electricity, running water and Internet.

Three days in, a boat sent by a company in Tampa showed up at the dock with a generator, fuel, food, water and gas to share. The crew asked, “Do you need anything?”

“It was a game changer to have a generator,” Esther said.

Now it’s been over a month and with many friends’ help, they’re still putting the pieces of their lives back together. But Esther is making the time to listen and pray with neighbors and enter into the wrestling that happens in the midst of suffering. Most days, the Westons invite someone they’ve just met over for a meal.

“This one woman came up to me—who I’ve only met a couple of times—and said, ‘you do know we’re going to need you right now. We’re all angry with God. We don’t know what to do.’”

Esther doesn’t have all the answers. And she knows clean-up in the hearts of her community takes time and effort. But she has a new list.

“I started keeping a list on my phone of things to be thankful for,” she said. “There’s no way to even keep up with it.”